The past weekend was a trip to Lake Titicaca in the eastern part of Peru.  It´s my first experience with an overnight bus as well as going to a completely different area of Peru (since Pisaq is in the province of Cusco).  Let me tell you, when they said it was gonna be friggin colder than Cusco, I almost didn´t believe them.  I´m glad my homestay family did not let me out of the house without a proper fleece sweater and winter jacket. 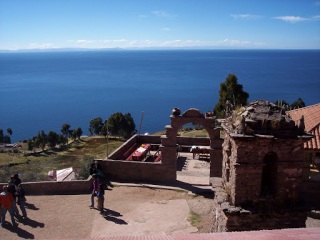 The ride there was atrocious.  It was 7 hours and I was freezing cold during the night, especially since I sat by the window.  We arrived at the Puno termino terrestre at about 5am and were met up by a guy named Marco who took us to his apartment while we waited for the bus to the boats.  That was weird.  He had a small one bedroom apartment and there was about 13 of us cramped in his sala.  So we sat for 2.5 hours, watching Big Daddy in Español (which had the funniest voiceovers since Adam Sandler had a deeeeeep voice). I was mostly weirded out by being at this dude´s apartment and many of the others were half jokingly questioning the legitimacy of the trip.  However, at 7-ish, we were ushered into a bus and headed to the boats that would take us to the islands of Lake Titicaca.  But, before we set sail, there were several visitors on our boat.  Most were selling things, which I didn´t mind. However, there was one who came in with his chiranga and wind flute tied to his neck.  He serenaded us with several delightful (sarcasm) renditions of Andean folk tunes.  Normally I´d be interested in this cultural experience… however, since I had barely slept in the bus the night before and had to be up very early, I was ready to throw orange peels at him.  But finally he left and we were off.

Our first stop were the floating islands of Uros.  These islands were really interesting because they were made out of the reeds that grew on the banks of Lake Titicaca.  Apparently someone had beef with them or something and they decided to make up their own islands to live on, on that is pretty mobile if they forget to properly anchor it.  The reeds were also used for eating and helped kept the islanders healthy.  As interesting as it all was, I didn´t like how very touristy these natives were made to be.  I mean, they sang ¨Vamos a la playa¨ when waving us off on this big reed boat that we had to pay 10 soles to be on.  And I ended up buying a pillowcase from the person who showed me her house because I dont know how to say no to nice poor girls.

Anyway, after that was a 3 hour boat ride to Amantani, which is the island we were to spend the night on.  Mind you, if the boats had put a little more gas in it, the boat ride might have been cut in half.  But then again, I had a suspicion that these boats were really up to code and would probably fall apart if they were to go any faster.  Nevertheless, I enjoyed the three hours because I sat in the back with my favorite Dutch, relaxing in the sun and taking a nap.  Granted, the smell of gas had made me nauseous.. but I heard it was colder in the other parts of the boat.  But… the smell, coupled with the altitude and cold from the trip served to hinder my climb up the steep slopes of the island as I headed to my place for the night.  I was the last one up.. along with my friend.. and when I got to the place, I was so sick that I ended up just sleeping and missed the excursion up the hill to see the sunset.  I even wondered if I had a fever since I had some chills. 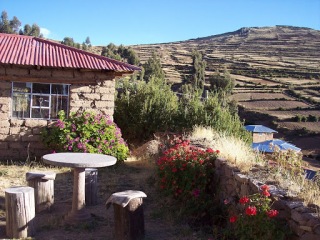 However, I managed to get myself up in the evening as my host family dolled me up in their traditional attire and we danced away the night.  Of course, very touristy.. and I wonder if the families get tired of doing this every night with new tourists.  But I guess it helps them make a living. In general, I was just happy we didn´t have an outhouse for a bathroom!

The next day, we headed to Taquile.  If I thought Amantani was steep.. this was worse.  It was pretty.. but at that point, I had it with climbing up mountains.  And plus, we ate at a restaurant for 20 soles and the food wasn´t that good.  but I enjoyed learning about the different ways they wear hats to signify whether their married, single, looking or a player.  Then, we climbed back down and headed 3 hours back to Puno.  Our ride back on the boat was funny because once we got closer to coast guards, our boat people had us put on life jackets and climb down from the top of the boat.  Were we doing something illegal?  Yea…….. 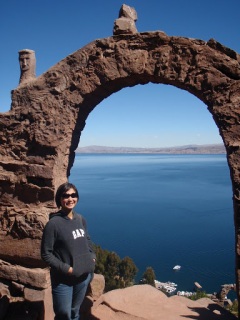 Anyway, the town of Puno wasn´t very interesting.  We had 5 hours and spent about 4 hours of it at a restaurant by the plaza de armas…. with 3 hours of playing Never Have I Ever with no alcohol.  Yes, we were that bored.

That´s more or less the excursion for the weekend.  When i remember more things, I´ll add it.