May Day in Munich

You could definitely tell something was up when drinks were served. Granted, this was the first time that I’ve flown on Lufthansa. But when drinks were passed out and a large bottle  handed

to those who requested beer, it was more than just good German hospitality.

After arriving in Munich, we walked through the open terrace on the way to the underground. The sound of German folk music signaled that there was some sort of celebration before we saw people dressed in traditional garb! It seems that we came at the perfect time.

We arrived during May Day celebrations (1 May). What lucked to get a 7-hour layover in Munich, Germany! With that kind of time, it’s hard to miss a chance to check out a new city. To make the opportunity even more perfect, Munich Airport has a brochure complete with suggestions on where to go and what to do for people who have a long layover. 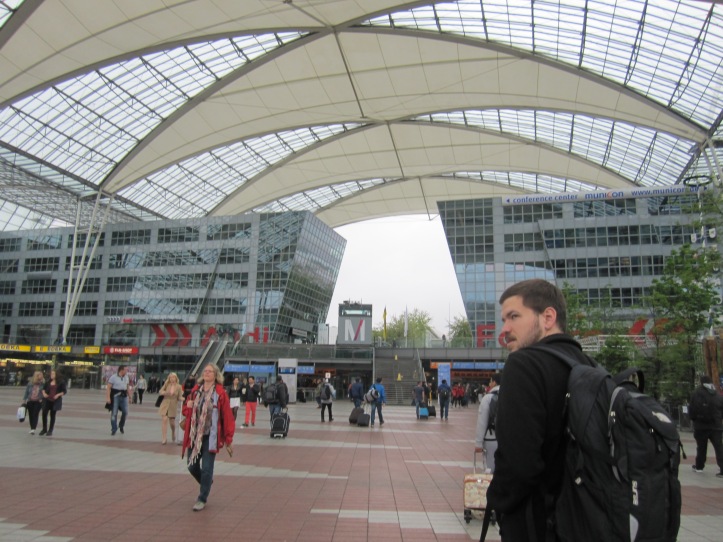 With all the merriment, a rainy day in Bavaria couldn’t get me down. We got a partner day ticket (unlimited for one day for 2 people) to take the S-Bahn to and from the city center for 22.30€. It took a half hour or so to get to the center, but it was fun to watch the passing countryside and small towns along the way.

With only a handful of hours, we explored one part of the city – Marienplatz, which seemed to be the epicenter of most tourist sights. Sure enough, it was the place to be. In the plaza, there was a crowd of folks who braved the rain, surrounding a platform where bands were performing. To the side, another booth was selling beer to passersby.

The Rathhaus in Marienplatz has a famous glockenspiel that would play a couple of times in the day. Since there was still another hour or so before the next show, there was time to visit nearby St. Peter’s Church for a bird’s-eye view of the city. The staircase to the vantage point was narrow, but well worth the leg burn.

After taking tons of pictures of how gorgeous the city looked from above, it was time to watch the old glockenspiel do its thing. We headed back to the plaza, this time in the pouring rain, and bought a cup of beer to keep us warm.

The show at the was interesting, but we watched only about 5 minutes. Blame it on short attention spans. Instead, we went to the next must-see listed, the Frauenkirche. It’s a gothic cathedral that is known to have the “Devil’s footstep” inside. During World War II, the inside was destroyed, but you couldn’t tell from seeing it now. Honestly, we were more distracted by the area right in front of the cathedra. We don’t know it’s purpose, but most of our time was spent walking through and taking pictures there. 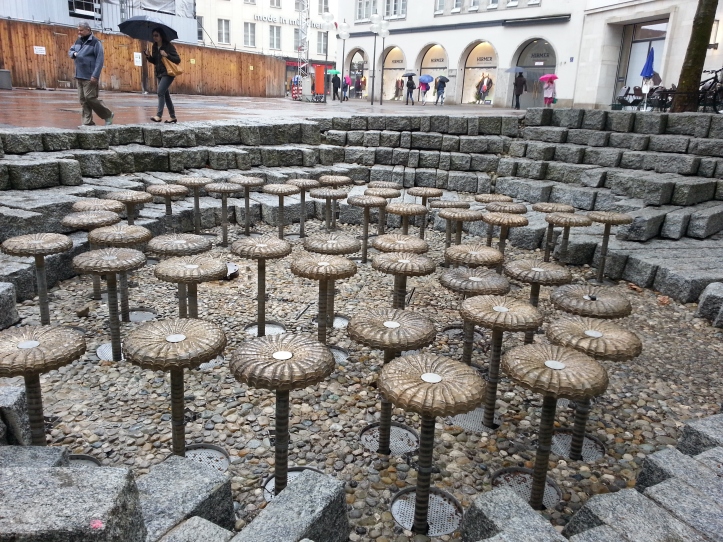 There were many other sites we discovered while wondering the area around Marienplatz.

In front of the Bavarian State Theatre

tulips for a rainy day

Finally after all the walking, we were getting pretty hungry. Since this was the location of the world famous Hofbräuhaus, we tried to get some grub there first.

However, though the hall itself was larger than Hogwarts and boasted at least 3 floors, there was no room for 2 hungry/wet humans. At least we can say that we’ve been there. Just the experience of being in a very large room filled with loud raucous joyousness all around was memorable. Instead, we went in search of  a restaurant where one finds just the right amount of cheer to hear yourself think.

At the end, we ate at Augustiner am Dom. The restaurant’s layout was fascinating since it was several floors (5 maybe). Though, in areas where space is a hard to come by, it makes sense that even restaurants are built up instead of spread out. 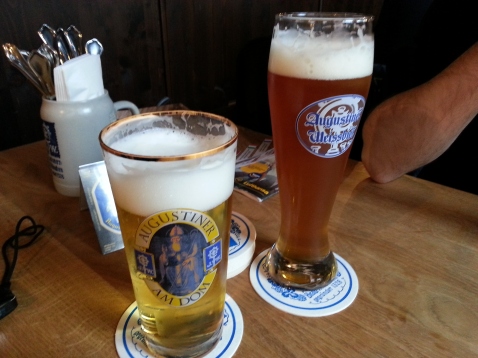 With all that walking, we were very pleased to have some have some comfort food warming our stomachs. After the meal, we headed back to the airport, happy at a half-day layover well spent in this lovely German city.