Finally, a day to relax

I definitely had been attempting to cram too much in the two days that I have been here.  This took a small toll on me yesterday and ended up feeling slightly nauseated, barely ate and could hardly climb up any sort of incline for the latter part of the day.  Nevertheless, it was still fun-filled and we didn´t return home until late, again.

First thing in the morning, we had to take a placement test at the school.  My housemate and I were kind of late, but at least we weren´t the only ones.  The written part of the test was okay.  The front had easier sentences to complete but the back was much more difficult.  There was a short essay portion and I definitely wrote some English words there just to explain myself. haha.  All in all, I think I did not do as badly as I thought I would on that.  However, when it came to the speaking part, I was terrible!  I thought the speaking part would ask questions that I would know, but she made it hard, I guess to get the right idea of how much I knew and not just what I memorized from a book.  I ended up at a beginner class, but with students who had already been there for a week… so at least it´s not the absolute beginner.  🙂  I guess it´s slightly cheating that Filipinos have a grasp of some Spanish vocabulary because it´s part of our language.

My class ended up being in the afternoon which is sad because my other housemates had theirs in the morning.  I spent the morning chatting with other students and went around the city to get water.  In the afternoon, I took a taxi alone for the first time, which was pretty painless.  Although I told him to drop me at the street where the school is but he dropped me at the plaza and said he couldn´t go up there.  Ack.  I ended up having to climb up that darn hill again!  Nevertheless, I felt better when class started.  The other students were fun and we just had a lot of laughs together.  Plus the view from my classroom is amazing. 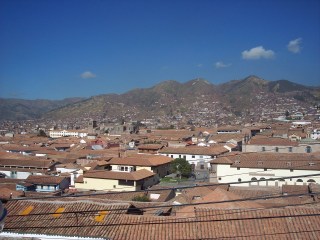 When class finished, we ended up playing bullshit on the terrace.  It went on for a while until one of my classmates won in epic style… with 4 of a kind.  After that, we wondered about a presentation that was supposed to happen.  Turned out we were at the wrong place.  However, since we were the audience, the person waited for us and all we had to do was move to the classroom.

It was an interesting presentation about a bridge that is rebuilt yearly from grass in the pasture by the eldest son of the eldest son etc. etc. etc. from Incan times.  After, we went to our welcome dinner and got our first taste of pisco sour.  It was not bad but not amazingly good… but enjoyable. haha.  Then a group of us decided to wander around and ended up at a Mexican restaurant for a jar of horchata and for them, cervezas.  Overall, another fun evening. 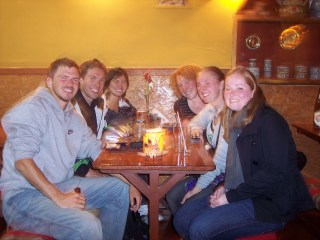 By the way, the stars here are amazing.  We are so much closer to the sky and the air is so clear that the stars can be seen so well.  Hopefully, I can do some stargazing while I´m here.

Anyway, today, I ended up catching up on my sleep, trying to adjust to the altitude and new environment.  Also, I don´t want to spend on a taxi twice since I don´t have much small coins on me.  Better get ready for lunch.