Driving down Kalaniana’ole Highway in the island of O’ahu, you see a distinctive landmark jutting out on the left on your way to Hanauma Bay. It is called Koko Crater, a sight that I passed often while living in Honolulu.

I never thought much about that place until my recent visit. With only a week stay, I wanted to do something new. Most tourists visit Diamond Head for a short and easy hike, which I recommend if you are visiting for the first time. But if you want something more challenging, Koko Head is worth your time.

It was on a whim after snorkeling at Hanauma Bay that I decided to go. Carrying only a tote with a bottle of water, granola bar and camera, I headed to the base of this giant hill. Luckily, I ran into some girls who just finished the hike. They gave me two great advices. 1) Don’t bring a tote bag (if you have to bring a bag, make sure it’s a light backpack complete with only water and camera with maybe an energy bar cuz you’ll need it). 2) Take your time.

That second advice was the best one since I had no idea what I was getting myself into. I enjoy occasional hikes, but this was the mother of all. It was all uphill over old railroad tracks which only get steeper as you near the top. 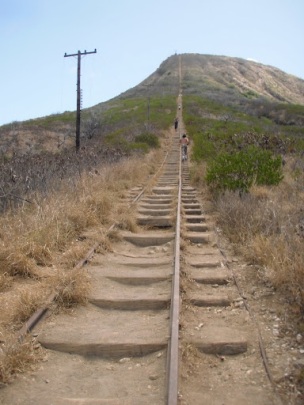 At one point, there are only the tracks over a ravine. I’m slightly afraid of heights, so this was one of the most challenging parts for me, both going up and down.

There were several times I wanted to give up. At one point, I would do three steps and find myself resting another 2 minutes before continuing. However, I knew I’d be very disappointed with myself if I didn’t bother finishing because of something that was “too hard”. It became like a metaphor to what is coming ahead of me in life: grad school. Additionally, looking back was just as scary as the steep climb ahead, so it really didn’t matter which direction I went. 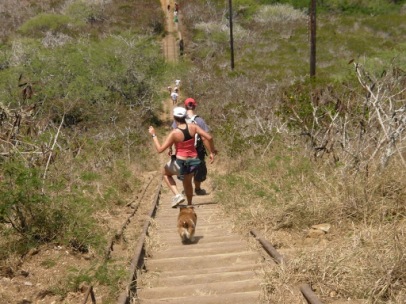 In the end, it was worth the effort and the mental struggle. The view was spectacular. The wind was deliciously refreshing (don’t try hiking close to noon like I did). I felt so accomplished and on top of the world! =)

If you’re looking for the trail, it starts at Koko Head Regional Park. Park your car at the last lot. There is a sign that says vehicles can go through. You can follow that paved path to the start of the hike or take a shortcut up the hill and grass by the baseball field.  There is a metal rod without a sign on your right. It will lead you to the tracks. Good luck! 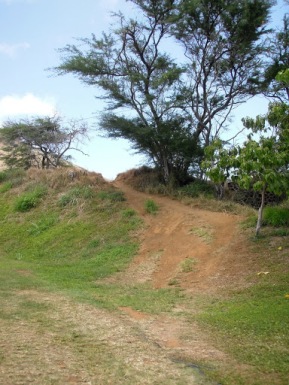